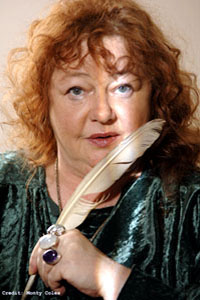 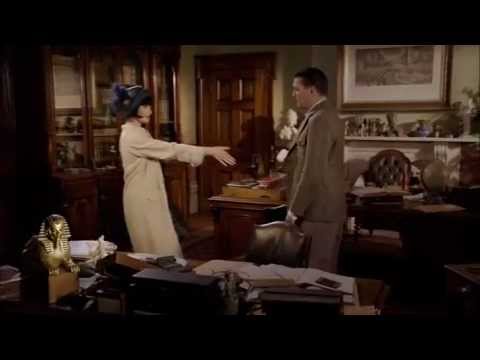 Thank you very much for buying this book (and if you haven't bought it yet , please do so - I have cats to feed. It would make an ideal present fr anyone who likes history, clothes, fashion, food or beautiful young men... Have I left anyone out ? )

Commenter  Japprécie          130
Dead Man's Chest de Kerry Greenwood
Money cant buy happiness but it can vastly improve the quality of your misery.
Commenter  Japprécie          121
Raisins and Almonds de Kerry Greenwood
Phryne Fisher was dancing the foxtrot with a sleek and beautiful young man. She was happy. She was agreably concious that she was gorgeous, from the turn of her brocaded shoe with the Louis heel, through the smoky-grey stockings of the sheerest silk to the Poitou gown, tunic and skirt of heavy, draped, amethyst brocade threaded with a paisley pattern in silver. A silver fillet crowned her black hair, cut in a cap like a Dutch doll's. She had a huge amethyst in silver on her right hand, a wide band of engraved silver around one upper arm, and the same stones in her ears. She smelt bewitchingly of Floris honeysuckle and knew, without doubt, taht her partner appreciated her. He would not, otherwise, have spent a small fortune on the purple orchid which decorated her shoulder. Another young man might have spent money, but only a devoted and intelligent young man would have ascertained the colour of the dress on which it was to be worn.

His name was Simon Abrahams. Phryne's Chinese lover, Lin Chung, had been forced to go to Shanghai on a silk-buying trip, and Phryne found that she had rather lost her taste for plain ordinary young men. Searching for a diversion, she had collected Simon from a public dance hall. He was not conventionally good looking. His nose was high bridged, his eyes dark and set deeply into their sockets, and there were shadows under them which spoke of childhood illness. He was not tall, being a few inches above Phryne's five feet two, but he was beautifully made and stunningly dressed, and there was a flavour about him - his diamond tie pin a little too large, perhaps, his gestures emphatic beyond the usual Public School rule, his voice quick and emotional - which made him as exotic as a tiger lily in a bed of white daisies.
+ Lire la suite
Commenter  Japprécie          60
Cocaïne et tralala de Kerry Greenwood
L'apparition de Miss Fisher en haillons, escortée par un danseur torse nu et deux chauffeurs de taxi au sourire extatique, produisit une impression durable sur le portier du Windsor, qui n'aurait pas hésité à parier avant ça qu'il avait déjà tout vu.

- Tu jaspines-ti français, mon pauv'e ?
Commenter  Japprécie          10
Murder on a Midsummer Night de Kerry Greenwood
Phryne was making a list of invitees for her birthday party. She would be twenty-nine on the thirteenth of January. A serious age. Most of her contemporaries were long married and rearing children, husbands and tennis coaches in utter suburban happiness. She caught a glimpse of herself in the drawning room mirror as she reached for a Turkish cigarette and her lighter. A small young woman with a boyish figure, dressed in a house gown of scarlet and gold. Her hair was as black as a crow's feather and cut in a cap, just long enough to swing forward in two divinely modish wings. Her skin was pale and her mouth red ans her eyes a strong shade of green.

"You don't look twenty-nine," she told her reflection. "You're lovely!"