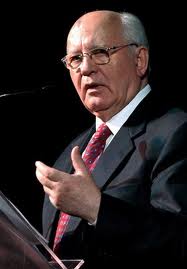 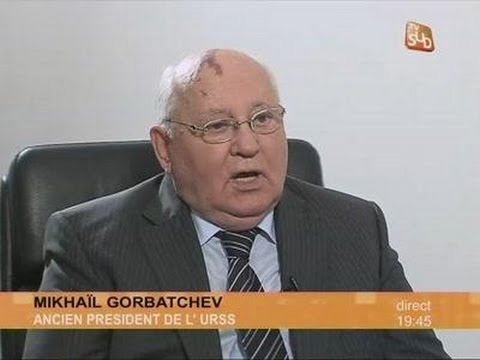 Podcast (1)
Citations et extraits (6) Ajouter une citation
Mikhaïl Gorbatchev
Sur notre planète, comme sur un jeu déchecs, les cases blanches de la prospérité jouxtent les cases noires du malheur.
Commenter  Japprécie          391
The August Coup - The Truth and the Lessons de Mikhaïl Gorbatchev
« In the most general terms the aims of 'perestroika' are : economic freedom, political freedom, escape from isolation, and the inclusion of the country in the mainstream of civilization. And the fundamental principle, if you look at it on a philosophical level, is the unacceptability of any ready-made models which might once again, however good the intentions, be imposed on society, to bring people happiness 'from above'.

The aim is to emancipate the vital forces of the people themselves, to offer them the possibility in free movement to create their own well-being  each one individually and all together  and to pave the path to their future not on the basis of dogmas but guided by simple and universal human values, developed through centuries of worldwide progress. » (p. 104)
Commenter  Japprécie          45
Mikhaïl Gorbatchev
Celui qui vient trop tard sera puni

MIKHAÏL GORBATCHEV, en 1989
Commenter  Japprécie          40
The August Coup - The Truth and the Lessons de Mikhaïl Gorbatchev
« Many people now say : did Gorbachev really not foresee it ? Of course I did foresee the theoretical possibility of a sharp conflict between the forces of renewal and reaction. And I was not alone in that. [] I tried not to allow an explosive resolution of the contradictions to take place. I wanted to gain time by making tactical moves, so as to allow the democratic process to acquire sufficient stability to ease out the old ways and to strengthen people's attachement to the new values. In short, I wanted to bring the country to a stage where any such attempt to seize power would be doomed to failure. » (p. 13)
Commenter  Japprécie          10
The August Coup - The Truth and the Lessons de Mikhaïl Gorbatchev
« This is the specific nature of the process of 'perestroika' as a whole. It is not a question of the President's powers but of the moral and political principle. After all, in our country everything was always decided ultimately by the use of force. Political life was conducted on this basis : if you are my opponent and I am in power, you must at the very least be sent to prison. But now we have recognized the legitimacy of pluralism in the economy, in politics and in the whole of public life. But all that has yet to become a reality and it is going through a very painful birth. » (p. 100)
Commenter  Japprécie          10
The August Coup - The Truth and the Lessons de Mikhaïl Gorbatchev
« As a person who headed the Communist Party of the Soviet Union since 1985 I cannot avoid the question of the attitude to communists. My position is this : I am a resolute opponent of whipping up anti-communist hysteria or allowing the persecution of millions of communists, honest people who have done nothing to stain their reputation. For a long time I really did think that the CPSU could be reformed. But the August coup destroyed thoses hopes. I realized that a short time after my return from the Crimea. » (p. 46)
Commenter  Japprécie          10
Intégrer blog
Acheter les livres de cet auteur sur
Bibliographie de Mikhaïl Gorbatchev(12)Voir plus