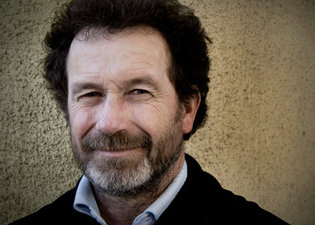 It was before the time of radio towers.

When the fog was thick: half speed, nearly blind. Out of the invisible, the point appeared  and in a single stride was right on them.  Horn bellowing every two minutes. His eyes read straight into the invisible.  (Did he have the labyrinth in his head?)  The minutes passed.  Shallows and rocks memorized like psalm verses.  And that feeling of were right here that must be held, the way you carry a brimming pot so nothing gets        spilled.

A glance down into the engine room. The compound engine, long-lived like a human heart, worked with large smooth recoiling movements, steel        acrobats, and the smells rose as if from a kitchen.

Grand-père était un pilote novice.....)
+ Lire la suite
Commenter  Japprécie          220
Dans le sillage de Per Petterson
When my mother and my father came out of the tabernacle in Hausmanngate after they had stood before the priest and both said yes, my father stared at the ground with a frown on his face, and turned to one of his brothers, Trond, and said :"Nailed to a cross on earth."And then he laughed.

Lecteurs de Per Petterson (359)Voir plus